Intense and Athletic Ke'Von Curry has a passion for making his team better at John Marshall! 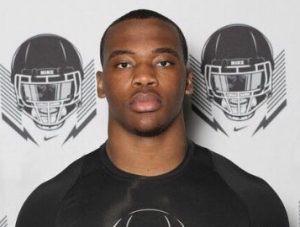 @VonCurry_
Curry, ranked #6 LB in Oklahoma, is like a Reuben Foster type player, he plays very fast, is a great physical specimen, plays great downhill football, and is a great player reader, and set guys on his team up in position to also make plays.

Ke’Von is a very vocal leader on the field, a general or the team if you will. He gets the guys fired up and plays with tremendous passion. One of the most dominant and athletic players you will find, meet Ke’ Von Curry.

Ke’Von —This season was a little rocky for the team, finished 8-3 but over all I feel I play great this season, had a 19 tackle game, and an 18 tackle game this season. I ended with 100 total tackles in 11 games, last year I finished the season with 92 in 15 games so I am extremely pleased with how much more active, came 1 game short of achieving my season goals but not discouraged at all

Ke’Von— Reading offenses and Run stopping ability Who has been the most influential person in your football life so far?

Ke’Von— My dad has been my most influential person for sure, he always put me in position to win, he’s talked to literally a hundred coaches for me making sure I get an opportunity at the next level , he’s gotten me with many personal trainers for speed and agility, strength etc. he does above and beyond what he has to for me

Ke’Von—This summer I was at a camp every weekend, started at ECU, then went to Texas A&M Commerce, then went to the Memphis Football camp, after Memphis I went to a camp at Southern University, Then a camp at University of Southern Mississippi, and Central Michigan. those were all mega camps and I went to The Nike opening regional. The experience with going to the camps especially in the south were great, I got a chance to compete with some JuCo guys and real speed down there, I really learned to cover man to man pretty well but didn’t have to incorporate that too much this year. Biggest realization I had was that I’m competing against more than just my state but to even be able to compete with another state I have to be the best in mine which I believe I am

Ke’Von—Looooove Wrestling, Freestyle wrestling , I think wrestling is one of the greatest sports out there

Ke’Von—I have a stretching routine I do every game, I got it saved in my notes as “Tight Hips Dont Make Chips”

Six Star — What has been the best game you have had in your career and why?

Ke’Von—@brycestephigh (Bruce Stephens) his playmaking ability is just off the charts, he’s like a Lamar Jackson at WR

Ke’Von—My boy Pinniy @OPinniy , he’s gonna do great things at the linebacker position next year, I’ve gave him all the knowledge on the position that I have from reading individual players to entire offense I believe the middle will be in great hands