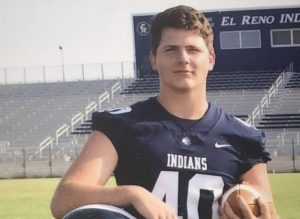 @hunt_kolton
Meet one of the up and coming stars in Oklahoma, a big kid that has some great hands and bring a physical presence to his team, primarily as a very good TE but also at the LB spot on defense. Kolton, a 6-4, 235 bruising TE who also has good hands is a super soph. that has one of the brightest futures at the position in the state and one we feel colleges need to keep an eye on..

Six Star football – What are some of the things that you feel you improved upon during this off season?

Kolton – Something I have improved upon this off season is my blocking ability.

Kolton – The most influential person is my uncle. I played with him for all my life threw little league.

Six Star football – Tell us about your summer, camps, combines, visits, etc. Tell us about the experience and what you were able to take away from it, what camps you attended?

Kolton – I’ve visited one camp it was the UCO camp and I was having back problems during that time so it limited my ability to run routes.

Kolton – Sitting there listening to music by myself getting focused.