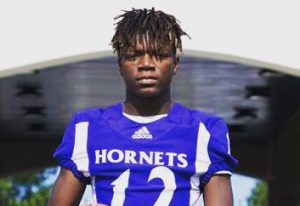 @KyronDowning
The future is now for this sensational 5-11, 158 pound freshman running back from Vinita, and is you have not already heard about Kyron Downing, believe me you will know his name well over the next three seasons. Although he is a freshman, his game has similarities to styles of NFL stars of the past Eric Dickerson, and a mix of Bo Jackson and Barry Sanders.

Six Star —How would you describe your freshman season

Kyron —Coming in as a freshman, I wasn’t expecting to play a lot on varsity or even start. The coaches and my mother wanted to just test my freshman year out, gain a little weight, and slowly move me in the mix. I’m a competitor, so I wasn’t holding anything back. The scrimmages, practice, and then the first varsity game, I showed the coaches I was ready. My freshman season was successful. I didn’t really understand how big of a freshman season I had until a lot of former players in our community reached out to me explaining how I’ve broke records that hasn’t been broke in over 100 years and how they were inspired by me breaking the barriers in Vinita that they couldn’t or wasn’t given the opportunity too.

Kyron —I feel overall, I played well. I learned a lot and improved on a lot. I seen growth every game.

Kyron —Seeing the field more and being more confident in my overall natural abilities and skill.

Kyron —Even though this person has never played football, I would have to say my mother. She signed me up in 3rd grade to play football. She told me if I run faster than everyone on the field then I won’t get hit. It worked majority of the time. She made sure I learned everything I needed to know. Books, YouTube, Create my own plays, how to utilize my peripheral vision and hearing, we had football Sunday’s in our home, we would dress up in gear and she would hit me hard to teach me how to protect the ball. Just a lot of things she instilled in me at a young age, that I still carry with me and she continues to do. Tell us about your summer, camps, combines, visits, etc.

Kyron — During the summer, I run AAU and USATF track. I train daily majority of the summer. 3 days a week in Tulsa and 4 days a week in my hometown. I went to a camp called Day of Champions. There, I was picked to attend an Elite private Football camp under the direction of Ken Heupel, Coach Bob Fello, Coach Earl Mosely, Coach John Shannon. One day, from 8am-4:30pm. It was the best award I could have ever got. I was not only taught football fundamental but I was also taught how to take notes in the locker room, discipline, mental strength, focus, respect, everything that has helped me on and off the field. I had to carry that football around the correct way majority of the time when I wasn’t involved in another workout. And they dared me to drop it. I also attended the OU football camp.

Kyron —•I’ve had my colleges picked out since 7th grade. OU, Alabama, LSU, Notre Dame. At this moment I honestly don’t know who/if any schools know who I am to even be interested. A lot of coaches in Oklahoma think I am a move in to Vinita but I’ve been here all my life. I’m just getting to high school.

Kyron —I play the drums and I’m a pretty good beat boxer.

Kyron —I don’t have one.

Kyron —Favorite Song: I have many but one is Denzel Curry, Clout Cobain

Kyron —In my high school career, every last one of them. I never knew what to expect each game but one thing that was always made known to me was that the other teams defense was created to stop me. My teammates would always tell me “Kyron you have no ears this game” if they knew that the team was rowdy.