Idabel's LaQuan Wells....A player that makes things happen and strives to be the best 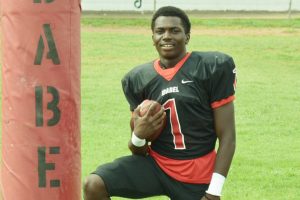 Sometimes in order to be the best you have to have another gear, another dimension, another will to be the best. Meet a player that holds all those traits and many more and the man leading the Idabel offense….Senior QB LaQuan WellsLaQuan
Wells
WR/QB | 5'9 | 150
Idabel | 2019.

Wells is always striving to be a little better than the guy next to him and plays every snap like its has last snap. Wells was named a VYPE top 100 player, was the District Player of the Year, and finished the season with 1,278 passing yards for 12 touchdowns, rushed for 485 yards ,15 touchdowns, 200 receiving yards, 2,049 all-purpose yards , and had 20 tackles, 5 ints, 19 pass break ups.

LaQuan—My summer was just getting ready for my senior season of football and make the most of it attended, UCO, ECU, Arkansas Tech and OSU camps this summer. I learned a lot about release and route running

LaQuan—I’ve been talking to quite a few coaches and East Central and Central Oklahoma are two schools that are in the mix.

LaQuan—On way to stadium me and my brother will text or call and have a heart to heart I usually let him do all talking , after that I turn music on and just clear my mind