Stout gets things done for Bethany secondary, DB to keep an eye on 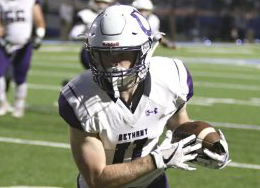 The Bethany football team prides itself on working hard and playing the best football they can put on the field. Without question Lawson Stout is one of the main leaders on the defensive unit that earns respect by its tough style of play. Stout uses his speed and vision to fly to the football and make plays all over the Bethany secondary. Putting in the time work and effort to be the best….meet Bethany DB and standout Lawson Stout.

Six Star — How has you season been

Lawson—I didn’t go to many camps this summer

Lawson— I listen to boys of fall song and speech

Lawson—Ads in the semifinals last year, I played pretty good and the atmosphere was amazing