The Truth making himself known as MLB at Chickasha 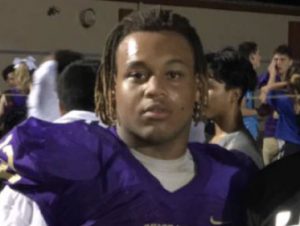 @GivensTruth
Meet The TRUTH….Lloyd “The Truth” Givens is one of the toughest, most physical and talented LB’s you will find. He is for sure a very enthusiastic, exciting and unpredictable player from his LB spot for Chickasha

Truth—My mom is a pretty big influence and I like to listen to the Motivational speaker Eric Thomas that’s influential to me.

Truth—I went to a couple camps over the summer and it was cool learning new ways to elevate my game to a better level but the most important thing I learned is that don’t let yourself get in the way of your own success. The only thing that can keep you from being great is yourself.

Six Star — What things did you improve on during the offseason

Truth—Some of the things I improved on was getting a better understanding of the game and not being hesitant when I play and just go.

Truth—Some small colleges near me like SWOSU and ECU has showed interest in me but I don’t have any offers yet.

Truth—when I squatted my pr of 545lbs

Truth—I would have to say my bro @Fatman_sse