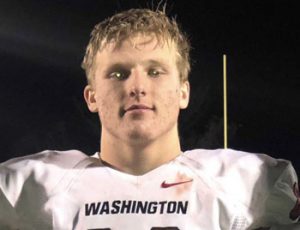 @L_Lane_L
A great mix of speed and strength and a player for sure to put Washington in the thick of the hunt for 2019 is junior Lineman Logan Lile. He uses a very aggressive and angry style of play to give him a good edge.

Six star football – What camps/kind of offseason did you have

Logan – I didn’t do much last summer but this upcoming summer I am scheduled to attend multiple camps such as the: The Opening combine in Dallas, the Grand view University Vikings football camp in Des Moines, IA. And I was invited to attend the spring game at OBU.

Logan – Things I am working on improving is my overall strength and speed.

Six star football – What colleges have looked at you so far

Logan – Colleges that have contacted me and showed interest are Oklahoma Baptist University and Grand View University.

Logan – I have is dancing with my teammates before pregame

Six star football – teammate that could be a star

Six star football – A player to keep an eye on is