Meet Loran Kirk of Jay, an all-around athlete who gets the job done 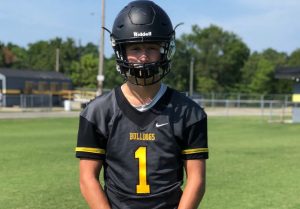 @LRayKirk4
One of the top receivers in the district, Loran has a plethora of talent and skills for Jay. Simpson has been looked at by scouts in the area at his games like NEO and Northeastern State and would make a very good college player in the future no question about that.

Runs a 4.67 in the 40 yard dash, 56 in the 400 meter. Has a very good vertical at 29 inches so can really get up on high balls. Had 450 plus receiving yards and 200 rushing yards, so very versatile athlete who can make it happen all over the field. Also a great SS that had 50 tackles this season. For sure is a player to keep an eye on and has a bright future ahead.

Six Star — My most influential person

Loran—My summer consists of summer pride, for multiple sports. 7 on 7, and team camps. I attended Tulsa-Air camp too. I feel like I became an all-around better athlete this offseason, got stronger, faster and worked on agility. Along with working on routes and playing catch with my brother.

Six Star — What schools would you like to attend

Loran—I would love to attend a Big-12 School.

Loran—I don’t have a pre game ritual, just listen to music and get my mind right

Loran—I don’t have a favorite song, but my favorite artist would have to be Juice Wrld.

Loran—is just this year, gaining weight and getting stronger all around.

Six Star — Teammates that could be big college players

Loran—A few teammates that could be stars are Kobe SixkillerKobe
Sixkiller
OL | 6'3 | 275
Jay | 2020 and Daylon Simpson.

Loran—All of my teammates have potential and work hard