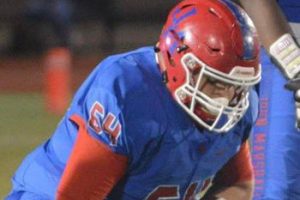 @ScurraMalachi
Meet one of the best and most dominating young linemen in the OKC area, John Marshall High School’s Malachi Scurra

The 16 year old sophomore stands 6’0 and weights in at 285. He uses as a combination of physicality and skillful play to be one of the top young linemen in the area and a player the Bears will no doubt rely heavily on for the upcoming ’19 season.

Six Star football – What camps have you been invited to

Malachi – I am a Sophomore but was invited to the Varsity Tulsa camp as a freshman and this past year where I played center for my team both times! I attended workout Junkies and continue to train hard weekly with my Teammates and on my own at 10 Gym and the YMCA by my house! I plan to attend a number of camps this summer and receive one on one training from coaches and Professional players at the next level! I am always trying to improve my skills and be the best student of the game that I know I can be! I feel I have improved and become more comfortable and confident in my stance and taking my first power/direction step, as I snap the ball to my Quarterback! I have had camp invites from colleges, and plan to attend this summer!

Malachi – my dad and also my coach

Malachi – I have had 2 colleges in Texas, 2 colleges in Kansas and 1 college in Oklahoma search information about ma and follow me on NCSA!

Malachi – is all about focus! Getting ready both mind and body to go to battle with my brothers! I think of my assignments and opponents I have watched video on and recall the different defensive sets I could possibly see that would cause me to adjust my center call outs!

Six Star football – Player to keep an Eye on