Mr. Excitement, putting on a show for Muskogee, eyes on junior Marcus Newton 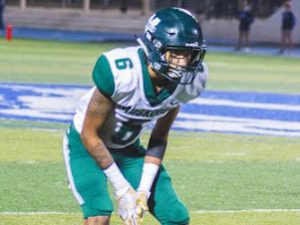 @marcusnewton25
One of the players Muskogee fans keep an eye on is the exciting Marcus NewtonMarcus
Newton
S/WR | 6'2 | 185
Muskogee | 2020, a player that is always on the verge of and looking for the next big play, the next mistake by an opposing QB, the next big hit right in front of him.

Newton is just that, he is a 6-2, 185 driven Safety that is a game changer for the green and white or Muskogee, but don’t be fooled he will still be reading his coverage assignments and keeping that in the back of his mind. Has good speed and fast feet. Plays the ball well in the air and has some good separation on plays from the DBs in coverage when he plays WR.

Six Star — What schools have been showing interest, what camps have you attended

Marcus —I’ve only been on 1 recruiting visit and it’s been to Oklahoma state @ the end of my sophomore season , I’ve starting to gain some more attention from some division 1 schools after my mid-season highlight tape was released about a month ago , I’m going to attend the rivals camp , and register for the opening in Dallas as well .

Marcus —What I be on – Jaydayoungan

Six Star — Teammate that could be a star at the next level ?

Six Star — Player to keep an eye on?