Forsberg is a TE prospect that could be an Elite college player!!! 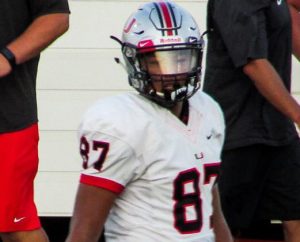 @BeastMar87
Taking a closer look at one of the Tulsa area’s top TE prospects, a look at a super sophomore Marlee Forsberg

Forsberg knows his role well and he executes his job at Union very well. He is a guy that makes sure his blocking is solid and that his guy won’t be the one making the tackle. Catching the ball, he can do that well too then uses nice speed in his route running.

Marlee—got to be my Mom.

Marlee—My summer I went to 4 USA camps I told a lot of of that like learning how to block better and stuff like that I went to a Arkansas camp and that’s really it -Speed, Strength , blocking, route running

Marlee—I don’t have one right now.

Marlee— Xxxtentacion before I close my eyes

Marlee—I really don’t have one

Six Star — teammate that could be star at the next level

Six Star — player to keep an eye on is