Hugo's Bray one of most exciting offensive player/prospects in Oklahoma 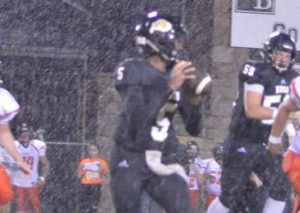 @Sj_Bray
Meet one of the most impressive athletes in the state, Matt BrayMatt
Bray
RB | 6'0 | 200
Union | 2019. Bray posted impressive career stats of 16 starts – 1,495 passing yards, 12 TD’s, 364 rushing yards, and 6 TD’s. Bray is a tough/strong runner between the tackles, but he does have good speed in open space. What we think sets Bray apart from other QB’s is his toughness with the ball in his hands and saviness about the game. Matt is a passer first, but can also hurt you on the ground.

The dual threat QB feels most comfortable throwing from the pocket but can really do it all. My season went okay. I think I could’ve done a lot better. Due to some injuries Bray only played 6 games at QB and only started 3 as a junior.

During the summer Matt attended three camps, the ECU prospect camp and Camp with the Champs prospect camp at Texas A&M Commerce twice. He visited UTEP in March and has been looking at NEO, Independence CC, Birmingham Prep, and Georgia Knights Prep Academy. Also Southern Nazarene, East Central, UCO, and Oklahoma Baptist have been in the mix. This past spring and summer Bray attended the VTO Sports Elite 100 showcase, ECU prospect camp, and Texas A&M-Commerce Camp with the champs. Runs a 4.66 in the 40 yard dash, crazy strong lower body with a 500 pound squat.

Matt – I only played 6 games at QB and only started 3. So really my season went far left.

How was your offseason

Matt- This offseason I’ve really just been lifting and throwing routes and trying to get my footwork better. Also working on my balance.

Matt- I couldn’t tell you who’s been the most influential person in my football life.

What camps did you attend/schools looking at you

Matt- During the summer I attended three camps. The ECU prospect camp and Camp with the Champs prospect camp at Texas A&M Commerce twice. I visited UTEP in March. It was a great experience getting to see their facilities and campus, and getting to interact with coaches and other recruits.

Matt-squatting 500lbs this past summer.

Player on our team to keep an eye on

Matt- William KingWilliam
King
RB | 6'2 | 190
Hugo | 2020 III. He’s an ATH that can play anywhere you need him to play. Fast, strong, and quick. Another player is Cameron Cook. Plays RB and can play a little slot receiver. He’s got speed and a good burst.