Gilmore, multi-sport standout and FB at Kiefer leads the way 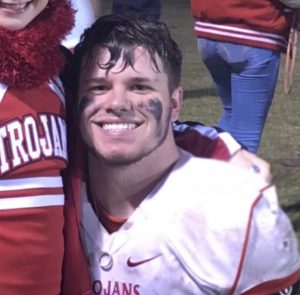 @matthewgilmore33
Meet Matthew Gilmore is one of the most versatile fullbacks you will find, and a two-sport athlete for Kiefer.

Gilmore has some very good hands and can run the ball quite well. The Kiefer product is a standout on the basketball court also, which helps his foot work and athleticism. One if not the team hardest working player, Gilmore is a tough nosed kid who is a team leader for Kiefer.

Six Star — Describe your season and, how do you feel you played overall for 2018?:

Matthew —our season wasn’t very good, we moved up into one of the hardest districts in Oklahoma. we were 2 points away from making the playoffs, we won our game but the other teams didn’t witch eliminated us. I think I played pretty good overall, blocking, catching and running was good but here’s always room for improvement.

Six Star — What are some of the things that you feel you improved upon during this off season? :

I’m starting to work on better footwork and making my core stronger. I’m a multi sport athlete so I feel like basketball is contributing to some of that.

Matthew —My father, we don’t talk a lot because of family issues. but he’s shown me how to be a man and how to handle situations properly. He was a multi sport athlete and Wichita State also. and my mother (one of the strongest women I know) was diagnosed with stage 4 colon cancer my freshman year and has only missed one game due to chemo.

Matthew —I attended a USA football camp and the OBU camp in Shawnee. learning from college coaches on proper footwork and technique has been something I want to get better at.

Matthew —Mostly just combine and camps. no visits or offers.

Matthew —calling my mom before the game

Matthew —My best game was Sophomore year at Porter. I had a 40 yard one handed catch and 2 touchdowns with 2 2 point conversions. I ended up with 100y rushing.

Matthew —Probably out mike LB Hayden Miller, He is a tank and has a ton of potential