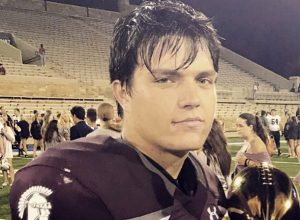 The ultimate team player who puts his team before himself, thus making himself a major factor in Jenks team success….Meet class of 19 OLB prospect Matthew Minnix.

“When going out of your way ignoring your responsibilities to make plays is when a good offense will capitalize. “In no way am I a stat guy because that is when I find a defense struggles the most, says Minnix.”

Matthew—in my life has to be my brother Mason Minnix. He is always so supportive of me even through his career at Arkansas Tech in Russellville, Arkansas.

Six Star — What colleges are your looking at

Matthew—I took visits to several schools including Arkansas Tech, University of Tulsa, and East Central University. I have 3 offers as of right now all from the Great American Conference with several other schools communicating with me daily.

Matthew—I attended camps at Arkansas Tech and Texas A&M Commerce. I can see their uses but combines didn’t fit my interest. If I could take away anything it would be that their is a lot of talent out there and much of which goes unnoticed.

Matthew—This off season I have increased my weight from 205 to 218 which I’ve noticed has made a big difference in my play style. I also have been studying more tendencies of football and realizing that it all isn’t just a black and white answer to situations. You have to know how the game ACTUALLY works and not just memorize what you have to do. This will immediately increase your level of play.

Matthew—My pre game ritual has to be at least an hour of alone time at my locker with an ice cold pedialyte.

Matthew—I have favorite song because I listen to so much music before every game, practice, meal, you name it.

Matthew—My favorite class would have to be English because it comes so easy to me.

Matthew—I would say my best game was our most recent game playing Norman High (I like to keep myself humble).

Matthew—My biggest weight room accomplishment would be getting 285 on clean my junior year only weighing 210.

Matthew—I believe Brady LathamBrady
Latham
OT | 6'5 | 290
Jenks | 2019 my good friend, Arkansas commit, and our starting LT will do big things for the Razorbacks.

Matthew—The hardest working teammate I can think of is Dylan Okeefe, our TE and DE. He is a straight baller both ways of the ball who doesn’t take one play off no matter the situation.