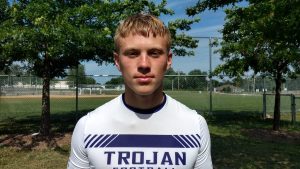 With a year of staring under his belt, Troy Buchanan McKennan Starkey is returning with high hopes for a big senior season.

At 6’0, 190-pounds, Starkey is coming off a junior season in which he threw for nearly 1,000 yards and nine touchdowns, while rushing for 350 yards and six scores.

However, those numbers might be a little deceiving as Troy does not run a prototypical modern offense, preferring to mostly keep the ball on the ground in the triple option.

“My job on the field I feel is different from a lot of most quarterbacks,” Starkey said. “In our offense, there is a lot of decisions to be made that are crucial to the movement of our offense. Our offense is based around the triple option veer, because of this it is very crucial that I deliver the football to whichever player has the best opportunity to gain the most yards or even score, whether it be the running back, slot or me.

“Decision wise, the offense will either succeed or fail because of me, while other quarterbacks will have designated running plays for the running back only with no read. So it is very necessary for the quarterback in our offense to be a quick decision maker and a confident decision maker.”

Starkey says the most important game for Troy a year ago was a Homecoming game against Francis Howell Central. It was the first Homecoming win for xx in eight years and its first conference win in four years.

Starkey threw for four touchdowns and a little over 100 yards.

“The whole school was supporting us so that we could win, and I didn’t want to let them down,” Starkey said. “I really wanted this game because I thought it would help tie the school and the community back onto the football team so we could gain more support. I had one of my best games everand had so much fun.

“It gave me a bunch of confidence coming into the next few games.”

Starkey says he is focused on improving his ability to read the defense more efficiently and faster, especially while running veer plays.

“Another big thing is my footwork,” he said. “What I believe is that if you have fast and confident feet to where you don’t have to worry about them every play, then it allows you to focus harder on other key components of the play.”

“Little did I know that I would turn into the game that I love,” Starkey said. “There wasn’t really any special team for our school back then, all it was was some dad’s who loved to help coach kids. It was really a fantastic time of my life, I learned a lot not just about football but about growing up too.”

Starkey says his dad has been the most influential person in my football career.

“He has always been there for me no matter what, even if he can’t make it to a game, I know that he is waiting for that call from me after my game to see how I did,” Starkey said. “He helped me grow into the player I am today.”

A fan of former NFL standout quarterback Peyton Manning, Starkey says he has tried to take various elements of his game and make them his own.

“He has always been my guy, every time he is on the field, he competes to his fullest ability,” Starkey said. “Watching him play growing up, made me want to have the ability to command excellence from everyone on my team so we could have the best chance at winning. His leadership was never in question, whenever it was a tight ballgame, you would see him cheering on his teammates.

“He truly wanted the best from his teammates. I truly think that the NFL would never have been the same without the impact of Manning, and that’s what I want to do, I want to leave an impact behind me that will be remembered.”

Starkey says he does not hold any offers, but hopes that will change with a big senior season. He has been to seven camps this summer and has talked to several college coaches.

“Right now, I’m not too for sure if many school are interested in me, I just know that I have gotten my name out and have tried to build a relationship with the coaches,” he said.