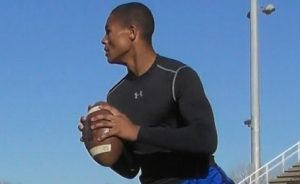 Meet an very unselfish player but one that has all the skills and talent to be a great one……Melchesidech Porter. His football Stats were limited as he played behind two senior. QB’s, Both who needed exposure so they took the game snaps. But in every camp Porter went to last summer he won either MVP or Camp Champ (U of Arkansas) Oklahoma, Tulsa, Baylor, Memphis. During the post season he received Academic All-Conference Honorable Mention and also received a Congressional Letter of Recognition. Porter knows his ability to play football is unsurpassed, but he had to wait his turn….STAY TUNED.

His colleges choices are University of Arkansas, Tulsa, Oklahoma and Oklahoma State because he plans to reside in the Tulsa area. “My post football aspirations are to become a Civil Rights Attorney and to Champion the under privileged and make our Country live up to its creed of “Liberty and Justice for ALL” and that Sir or Ma’am IS in my control.”