Meet Mike Lee of Choctaw, A player that has power and drive the make it to the next level 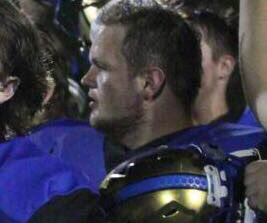 @Big_mike_76_
Meet one of the biggest and dominant players you will find on the Oklahoma football scene. Mike Lee stands 6’4, 340lbs, and started on PAT and was a 2nd string offensive lineman. Is a player that does a great job of being aggressive and uses a low, and hard off the ball way of playing to define his game. He is also competitive powerlifter. Lee squats 480, benches 275, and deadlifts 525.

Mike is a player that would really like to play football in college and went to 2 Oklahoma Baptist camps, and a SEOSU camp. He is currently talking to culver Stockton college in Missouri and Concordia in St. Paul, Minnesota

Mike—Our team went 4-6 this season, which wasn’t the outcome we were hoping for; But we tried our hardest that we left all of it out on the field and that’s all that matters

Mike—I feel that I improved on many things throughout my football career, like my strength, endurance, and my technique, but most importantly I grew closer to my teammates more than any other team that I’ve played for

Mike—I have attended an OBU showcase and lineman camp, and I went to a Southeastern Oklahoma State University showcase camp. I feel like I put my best effort into those camps. But my favorite part of this past summer would have to be the training program that me and my teammates went through together. Not only did we all finish, but we dominated alongside each other

Six Star — What colleges are you looking at

Mike—I’m interested into going to college wherever I can play football, no matter the level. It could be a JUCO, or NCAA division 1

Mike—I Love football not only for the winning games, or brotherhood made by our teammates, but I love working in the weight room, and on the field. Whether it may be light or the heaviest work we’ve ever done, I love the challenge. I may not be the strongest or the fastest, but I will always finish out, no question

Mike—What I’d usually do pregame is listen to music, hype my brothers up, and just have fun before the game

Mike—I’d say the Lawton Ike game we played this season would have to be my best game in my career because it was the first time I’ve actually played O line during a game for this team, and I, along with my brothers dominated up front

Mike—would probably have to be either me being designated as a rack leader in last year’s offseason, or me when I first hit over a 1,000 pound total. I can remember both of those like they were yesterday

Six Star — Player likely to be a college star

Mike—There are a lot of players on my team that I can see being a college star in football, but lineman-wise, I’d say either my buddy Cade Kelly, or Paydon Spencer

Mike—I’d also say the team as one unit also works harder than any other team in our conference, but the hardest worker I’d say is my buddy Paydon because no matter what circumstances he was given, he’d push through adversity no matter what

Mike—A player on my team you should keep an eye on in my opinion is Brysn Hunt. I’ve worked with him on the field and in the weight room since he was a freshman, and he’s grown a lot physically and mentally. This next season will be his senior year season, and he’s gonna do big things in the offseason and next football season