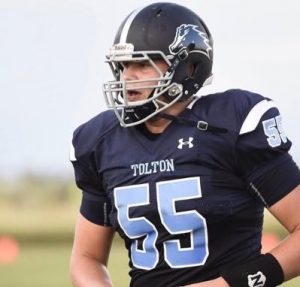 Monroe
Mills
OT | 6'7 | 285
Tolton | 2020 is making a name for himself this summer and recently picked up his first offer from Dartmouth after attending a camp at the school.

At 6’7, 285-pounds, Mills is an intense and physical lineman who brings good agility and footwork to the field for a big man. A year ago he moved to tackle and says the experience of playing varsity as a sophomore has helped him prepare for his junior season.

“I was able to beat the speed of the Ends and Backers,” he says. “This confidence will allow me to carry leadership to our Line this year.

He has spent much of the offseason working on improving his speed and strength and has dropped his 40 time by nearly half a second and improved his shuttle time to less than 4.9 seconds.

He says his older brother Montgomery Mills has had the biggest influence on his football career to date.

“He has played football with me ever since we could walk/tackle and he continues to make me better every rep,” Mills said. “I also had very good school coaches from elementary to high school.”

Tell us about your summer camps, combines, visits, etc. (Maybe just the ones that stand out).  Tell us about the experience and what you were able to take away from it.

Mills has spent much of the offseason attending a host of elite camps and combines and says the experience helped prepare him for the upcoming season and beyond.

“A couple of combines during the first weeks of June put me against some of the highest rated Ends in the country,” Mills said. “I proved that I was able to beat that caliber of opponent which gave me the confidence that I deserved to be there.”

Mills says Wyoming, Missouri State, Wisconsin and Mizzou have all visited with his coaches and has received camp invitations to Ohio State, Kentucky and Iowa State and North Carolina, Kentucky and Ohio State took him on personal tours of facilities.

He most recently attended camps at Harvard, Dartmouth and Penn and drew his first offer from Dartmouth on July 14.