Meet Montavious Harris...Tulsa Memorial HB and the District 5A-4 HB Player of the Year 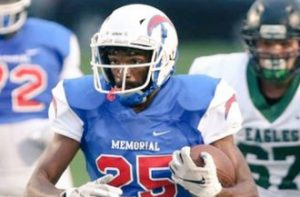 @ARECE_harris
Meet one of the more dynamic players in the Tulsa Metropolitan area…Montavious Harris of Memorial High posted 50 Rushes, ran for 385 yards, 7.7yards per carry, scored 5 TDs and had 107 rec yards. Not only was he a big difference maker for the Chargers offense, but he also was a safety/corner that had 121 tackles, two forced fumbles, and one INT. Harris has attracted Tulsa and Northern Colorado early on in the recruiting trail. Harris has proven to be a DB that can hit and cover. Harris also racked up the honor of being named the District 5A-4 HB Player of the Year.

Montavious—This season was the most challenging for me in many areas of the ball but I can’t say I didn’t put my all into. Tackling , footwork and speed were the main thing I work on in the off-season

Six Star — The most influential people

Montavious—I had in my corner to help me was my oldest brother and head coach.

Six Star — How was your summer

Montavious—My summer workout with my team, are always special to me because those are the guys I go into battle with.

Six Star — What camps did you go to

Montavious—I got to go to my first camp at TU and I did a great job for safety.

Six Star — What schools are looking at you

Montavious—There’s only two schools that are interested in me. Is Tulsa and Northern Colorado so far. Hopefully more come.

Montavious—I like to sit only and think about everyone and everything I’m fighting for.

Montavious—September by Earth, wind and fire. I like older music

Montavious—Bench press 230 as a 11th grader

Montavious—Moni Jones my running back.

Montavious—A play you should keep your eyes on is my Tony Salim, Jr