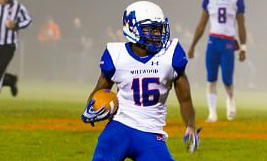 Six Star Football –What Camps did you attend

Six Star Football- What Colleges are looking at you:

Myles – Its not a lot of schools but, the schools that show interest are Nebraska, Oklahoma State, Missouri State, UCO, Minnesota, Langston, Western Illinois, and ECU.

Myles – in my life right now I’d say is my Uncle Marcus.

Myles – From the few camps I attended I learned more speed & agility workouts and since I play DB as well as RB I learned from a lot of good coaches the skills to be a better DB. So far, I’m going to have to say I improved my strength.

Myles – is making sure I bring everything I’m going to where for the game and turn up with my teammates.

Myles – right now is I’m the Mac by Lil Yachty.

Myles – as of now is Spanish.

Myles – was vs. Lexington.