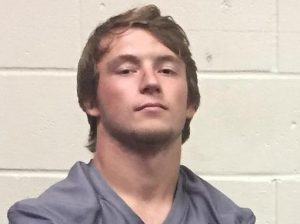 @nate_asbill
One of Eastern Oklahoma’s rising running back prospects is Nate Asbill of Sallisaw. The 5-8, 175 runner is a play maker that uses an aggressive and competitive style, along with good agility and vision to make plays for Black Diamonds. Nate used his talented skill set to rush for 4 TD’s and rack up 290 yards on 19 carries vs. Stilwell.

Asbill is one of the many veteran faces that first year coach Randon Lowe has relied upon get the program on the path to its glory days, once one of the state’s top programs. Sallisaw claimed a pair state championships in 1980 and 1981 and finished as runner-ups in 2000 and 2001.

“Summer was great, I improved upon my game and saw a lot of different styles.” Asbill says. “I really improved on my versatility.”

Asbill says Jim Brown and his style of play serves as his biggest football influence.

Sterling has offered Asbill and several GAC schools have reached out to Nate.