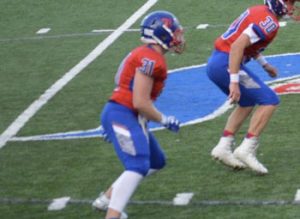 Bixby Spartans football will be one of the best teams in the state again in 2019 when they look to repeat at 6A State champions. One of those players that will be looking to get it done and make his impact is sophomore Nick Wedel

Nick
Wedel
LB | 5'10 | 200
Bixby | 2021, a very aggressive, and fundamentally sound LB, looking to continue the tradition rich position. With some key players graduating in 2018, Wedel will find his time is likely very soon. Does a great job of creating opportunities to make plays and tackles and is a talent for the LB spot.

Wedel, who in 2018 was a backup and that got into most of Bixby’s games in the second half or the 4th quarter gained some valuable experience. Wedel had 17 total tackles and 5 solo tackles.

Six star football – How was your season

Nick – I feel like it was a great opportunity to get a better feel and understanding of our defense.

Six star football – What did you improve upon this past season

Nick – in my football life is my dad. He’s been there since day one to help me understand the ups and the downs of football and to always keep my mind right.

Nick – I haven’t attended any camps and I’m not sure if I plan to. I haven’t had any college interest yet

Nick – my sophomore year was the first year I didn’t start at something on a football team.

Nick – is I always lay out exactly what I’m gonna where for the game the night before.

Nick – I’ve ever played was probably my 9th grade season we played booker t at home. I scored 4 tds and we shut them out defensively as well

Nick – I think is Tyler Parsons

Six star football – A player to keep an eye on

Nick- would be Mason Williams