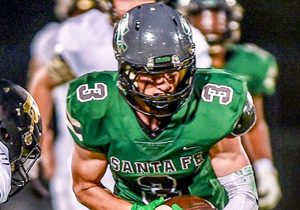 When Nieko plays WR, he is a big time speed guy who gets good separation, also very shifty. One of the best athletes you will find at love making plays after the catch. When he lines up on defense at CB, he loves to play man-to-man and his speed and quickness make him a top lock down corner in the area. Also is tough and physical player that is always looking for a challenge.

Six Star football – Describe your season and how do you feel you played overall for 2018?

Nieko – I feel that I played very good this season. I feel that I could have been used more on offense. More targets. That is just the competitive nature in me. I felt my play at CB was very good for being the first time I’ve ever played that position. But always learning and working to get better, that never ends.

Six Star football – What are some of the things that you feel you improved upon during this offseason?

Nieko – I really worked on and improved my core strength and speed. I got some size in the process. Improved my catching and rout running working out with our QB, Kanan.

Six Star football – Who has been the most influential person in your football life so far?

Nieko – That would be my family, not just one person. They have taught me so much about hard work. Stuff like earning your position, working hard, and not giving up no matter the circumstances.

Six Star football – Tell us about your summer, camps, combines, visits, etc. Tell us about the experience and what you were able to take away from it, what camps you attended?

Nieko – Tulsa, Texas Commerce, East Central University, University of Central Oklahoma and Southern Nazarene University were some of the colleges I visited, going to camps and I also got to see some of the campuses. It was a great experience for me, talking to the different coaches and players from all over. Going head to head against some good talent helped me with my confidence heading into the season.

Six Star football – What kind of college interest have you had so far, and what schools are showing you the most interest?

Nieko – NEO and SNU are the colleges I’m interested in so far. ECU, SNU, NEO, William Penn and Southwestern Kansas are showing some interest now but it is still early in the process. I anticipate there will be more.

Nieko – Love helping people in need. I have a soft spot for the less fortunate.

Nieko – Listen to music and get in the zone.

Nieko – Offense has to be Edmond North. Some big yards after the catches. Defense would have to be Broken Arrow. We did not win that game but my assignment was to lock down their number 1 WR and keep him out of the end zone. He did not score.

Six Star football – Teammate likely to be a college star:

Six Star football – Player to keep an eye on: