Eufaula's Noah Alexander, one of the best young RB Prospects in the state 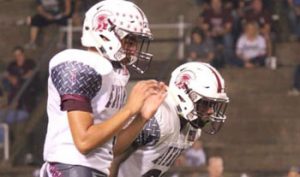 Noah
Alexander
RB | 5'10 | 184
Eufaula | 2021 of Eufaula, a sophomore running back and one of the best underclassmen RBs in the state of Oklahoma. Alexander, a fast-paced, speed rusher with an athletic frame ran for 1,450 yards and averaged 8 yards per carry for the Ironheads. Alexander returns with fellow classmate and sophomore QB Nick JonesNick
Jones
MLB/OLB | 6'0 | 215
Union | 2019, also one of the Flashiest runners in the state and a QB that can make plays happen with his feet and athletic ability. Alexander and Jones should be among the best in District 2A-6 and also some of the more athletic players you will see on the field for the 2019 season.

Noah – My season was one in which I learned a lot and achieved quite a bit as well, in the beginning I was still figuring things out but midway through I caught on to everything and overall ended with a pretty good year, 1,450 Rushing yards averaging 8 YPC.

Six star football – what did you improve upon during the season

Noah – I feel I improved my vision a considerable amount, footwork and strength this off-season.

Noah – Personally my most influential person is God, I don’t think I’d be near this far without him.

Noah – My summer last year consisted of me attending the Adizero Combine in TX, Tulsa University’s skill camp, NextGen’s camp, and Northeastern’s camp. From all of these I took away the viewpoints of various coaches regarding how a running back should perform and how to perform said actions.

Six star football – What colleges have shown interest in you

Noah – is to pray and listen to music.

Noah – was against Hugo because I ended with 298 yards and 4 TD’s. Previous I’ve never gotten that close to having a 300 yard rushing game.

Noah – goes from me squatting 420lbs to me deadlifting 485lbs.

Six star football – Teammate likely to be a college star would be:

Six star football – Player to keep an eye on: