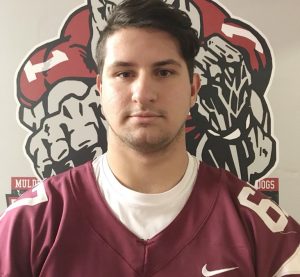 @VessellNoah
A two-way standout this season at Muldrow, 2019 OL/DL Noah Vessel brought stability and consistency to a young Bulldog team.

At 6’2, 250-pounds, Vessel says he was content to play his role within the team and play assignment football.

“I don’t look to be an All-Star from my position I just focus on my assignment from my position and let that help the team,” he said. “I feel I have played to the best of my ability and it shows on the field but I don’t think our record does justice to how good our team actually is.”

Vessel says he only attended one camp prior to his senior season as he competed at the Inola Team Camp and says it was a good experience for him and his team.

“I feel like I was able to find out we’re our team stood against the competition and how good our team chemistry was and it has truly increased from that team camp to now, if we had the chemistry we had now our season would probably look completely different,” Vessel says.

Six Star Football recently caught up with Vessel and asked him about his senior season.

Six Star — Most Influential Person
Noah — The most influential person in my life would probably be my brother he’s someone who’s always pushed me to follow my dreams in football and if it weren’t for him I don’t think I’d be playing football today.

Six Star — Biggest weight room accomplishments
I actually finished out the year with my squat at 475 and my power clean at 275 my bench was 245 and my military press was 235.

Six Star — The hardest working player on the team
Noah — Would probably be Logan nipper. From him running three miles in the morning during summer pride to staying after to work on foot work and agility with me I feel like he has the determination and the skill level to play on the next level