Hard nosed Sabatini making a name at Noah for himself 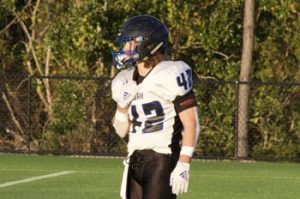 Christian – I’m a hard nose runner but also have some quickness.

Christian – My grandfather is my most influential person he coached at the Air Force for 28 years and is a college hall of fame coach and is a huge part of my life and why I’m playing football.

Christian – My father is the most influential coach he helps me though everything keeps pushing me to get better everyday.

Christian – My brother had offers from everywhere you could think of for baseball and football he decided to go play baseball at Baylor and now is coaching football for UNC.

Christian – My main goal this off-season is to get faster and quicker.
My most memorable game

Christian – would be playing against Oklahoma bible when we went in to over time I threw a touchdown to go into double over time when I scored again to win the game.

Christian – Benedictine and a couple other D2s have been showing interest.my favorite song is

As a kid it was

Teammate that could be good at next level

Player to keep an eye on

Christian – would be Declan Jones