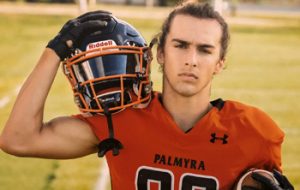 Style of Play
Abe – I’d say as a tight end I’ve worked hard at being a reliable receiver who can be trusted to get first downs and make big plays. I have the ability to adjust to the ball well in the air and make difficult catches using my length and height to my advantage. I also pride myself on good footwork/route running and the physicality to get off press coverage and create separation. I also enjoy blocking which can spring big plays for my teammates.

Most influential person
Abe- My grandpa, Norman Haerr. He is extremely kind, generous, hard working, and has always been a role model in my life for the man I hope to be when I’m older.

Most influential coach
Abe – my head football coach, Kevin Miles. He has always shown a ton of devotion to the game and to our team. He studies the game constantly and puts tons of hours into film, play making, and just making our team better in general.

Other great athletes in my family
Abe –  My dad, Shannon Haerr, was a really good football player. He played at a D3 school (Quincy University). He ended his career as an All-American and drew some NFL interest.

Goals in the offseason
Abe – My goals this offseason are to pack on weight and continue to improve on my quickness and route running.

Most memorable game
Abe – My most memorable game was our second game against Monroe City this year in districts. They are our rivals and had beaten us earlier in the year, so we were looking for some revenge. We started the game off scoring on the first drive, recovering an onside, and scoring again. We continued to hammer them on both sides of the ball and ended up blowing them out 44-20. That game was impressive because of how our are team played as a whole, but especially because of our quarterback Corder Lehenbauer who basically made all the plays calls on offense just by reading the defense’s lineup and produced an insane amount of offense in doing so.