Hunt puts in the work at Lawton and is a vocal team leader for his team. 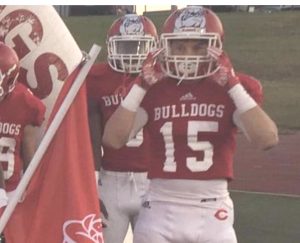 @payton_rodrick
One of the hardest working players you will find if Payton Hunt of Lawton, a transfer from Cache High School. Payton is a kid that never makes excuses and is always taking challenges head on.

If you are looking the all out type of kid that loves football and has a passion for the game and his teammates, look no further than Payton Hunt.

Payton—would have to be all of my teammates just pushing me to be a better player and teammate.

Payton—I visited SWOSU camp this past summer and the biggest thing i took away from it is that there will always be someone with the skill set like you, but you have to have a mindset that you’re going to outwork the person across from you, and that’s a big asset to winning. One of the biggest things i improved on this past offseason would have to be the knowledge of the game and the weight room. I can tell what type of coverage the defense is in by just their alignment on the field and i worked my butt off in the weight room this season with my peers and it’s all been worth it.

Payton—I am not talking to any colleges at the moment

my favorite class is math

Six Star — Teammate that could be an impact player in college

Six Star — player to keep an eye on