Payton Lusk....Deep threat standout receiver looks to be go to weapon for Owasso 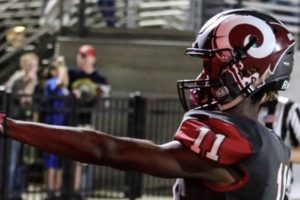 A very aggressive receiver when it comes to going and getting the ball that is a dangerous weapon and is considered to be a talented deep threat.

Payton—This season was a learning year because I haven’t played since I was little, but I played good this year I came out and worked and ended up in the end zone a few times.

Payton—I’ve worked on my feet I feel like they’re getting quicker.

Payton—Since I’m so new to football I haven’t got a chance to go on visits or camps but it’s definitely on the agenda.

Payton—Live an hour away from the school. I go to I live in Muskogee and I go to Owasso so I wake up at 5:00 to get to school. It’s always early mornings and late nights