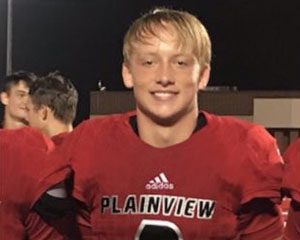 @payton0357
Payton is a versatile player (WR/QB) that can play in several key spots on the field and this season saw action for Plainview at receiver. Had about 20 camp invites this summer and took a visit to a McPherson in Kansas. He uses his physical ability, is a fast player and also shows he has a high football IQ.

Six Star Football – How was your season this year

Payton – I feel like I didn’t perform as well as I could have. Moving schools and entering a new style of offense was difficult and required a different style of play that the wishbone.

Six Star Football – What did you improve on during the offseason

Payton – I feel I improved on understanding the game and offense. This offseason really helped me adapt to the program.

Payton – My most influential person in my football life has to be my dad. He always tells me how it is and what I need to improve on.

Six Star Football – What camps did you attend

Payton – This year I didn’t attend any camps. I focused on perfecting my craft with the QB coach at Southeastern. He helped me grasp the concept of the spread offense along with the footwork and reads.

Six Star Football – What colleges are looking at you

Payton – I attended a visit to OU along with Southeastern QB coach showing some interest.

Payton – really like to focus on working hard in the classroom and outside the football program at setting the right example.

Payton – Best game of my career was when I was at Davis against Holland Hall. We were not supposed to win that game but I had the opportunity to make some big plays.

Payton – Being told I was a hard worker by my coach

Six Star Football – Teammates likely to be stars at next level

Eli
Russ
OT | 6'6 | 305
Plainview | 2020, and Tayler Berryhill are most likely to be college stars. They are extremely valuable players.

Payton – has to be Caden Pickens

Payton – Reis Taylor, also a freshmen, he is an all-around athlete