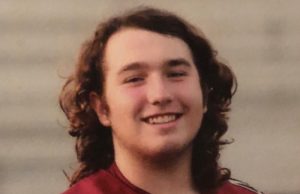 Pearson BashPearson
Bash
K | 6'2 | 230
Lincoln Christian | 2019 is one of the most reliable kickers you will find anywhere. He simply gets the job done…time and time again. “I am a kicker with both a strong and accurate leg,” notes Pearson. “I have had a strong season and I felt like this was the best year I have had in my career.”

During the season Bash improved his leg strength and flexibility. This has helped to Increase his distance on both Kick offs and field goals. Without question Pearson Bash is one of the top kickers in the state and a player coaches should pay attention to at the next level.

Pearson — I went to a few kicking camps and training sessions in the summer. It was a good experience being able to meet some of the best specialist in the country. It showed me what I needed to work on this summer to take my game to the next level.

Six Star — Most people don’t know this about me but

Pearson—I have a fear of heights.

Pearson —My favorite song is Took My happiness away by NBA young boy.

Pearson —My favorite class in school is Anatomy

Pearson —My best game that I have had in my career was against Inola. I went 6/6 on Extra points and 3/3 on touch backs.

Pearson —The hardest working player on the team is Tyson Ward

Tyson
Ward
LB | 5'11 | LB
Jenks | 2021. Tyson is only a sophomore but he plays like a senior and is one of if not the toughest kid on the team. I am very excited to see what all he does in his career.

Pearson —The player to keep an eye on is Zac Harwell. Zac is a Junior Safety with tremendous talent and athleticism. He is a player that is very under looked.