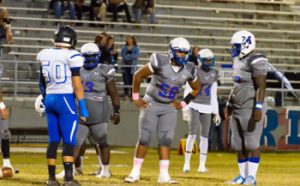 @perrylewis_56
One of the hardest working and most dedicated players you will find is Millwood lineman Perry LewisPerry
Lewis
OL/DL | 6'0 | 270
Millwood | 2020.

Perry – but this last offseason I worked really hard on my speed and agility to help me become a better pass rusher because my coaches told me that’s where I was the strongest in my game. Working on my hands everyday which led me to become the sack leader of my team. I got everything stronger because we lost are whole starting d-line so i knew it was my time to shine . Not only as a player but as a leader. Never giving up on my team playing to the best of my ability and hard work in the offseason and regular season makes me a great player

Perry – are you asking what players or people I know like Mom dad Etc,

Perry – This summer I attended the team USA camp and the Bob bobeck UCO camp its a great experience you get to meet a lot of people you wouldn’t normally meet and get a lot of detailed work . The past off season I feel as though I greatly I’m proved in strength, footwork, speed and hands.

Perry – Some schools I’m interested in are definitely k-state because they have such a great veterinarian program also LSU I have a lot of family this year and there recruiting classes have looked good and also OU always have been a boomer sooner ,no colleges have showed interest in me that I know of.

Perry – was squatting 4:50 the summer before last season Because I didn’t even know

Six star football – player to keep your eye on