With 166 tackles, Price Allman has proven he is one of the premier tacklers in the state for Patriots 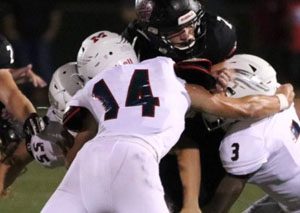 @p_all14
Meet one of the key reasons Metro Christian has made an impact in Class 2A-4, the Patriots hard playing and fast downhill skilled DB and receiver shows good hands and gets off blocks well to make tackles. Allman is a leader for Patriots on the field and on the sideline. Players like Price, Asher LinkAsher
Link
QB/S | 6'1 | 195
Metro Christian | 2020 (QB and future fellow senior) and Carson Callaway have Metro Christian lined up for another stellar season in 2019.

Price – I haven’t been to any camps yet but I plan on going to some this summer. I improved my tackling a lot and I’ve gotten a lot stronger.

Six star football – what schools have shown interest in you

Price- is praying with Asher before every game.

Price- was probably against Oklahoma Christian School when I had 22 tackles and two running touchdowns.

Price – was when I cleaned 225 for the first time.

Six star football – Teammate likely to be a college star is

Six star football – Teammates to keep an eye on