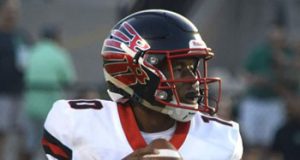 Meet Del City senior to be and Mr. Flashy, Quinlan GantherQuinlan
Ganther
QB | 5'9 | 190
Del City | 2020, an Eagle offensive leader that will look to have a phenomenal senior season and lead the Eagles in battles with 6A-II-1 rivals Stillwater and Midwest City. Ganther has all the tools, arm strength and footwork to be the best QB and most athletic one in the district. You would be hard pressed to make an argument than he is not the most athletically talented man under center in 6A-II-1.

Six Star Football – How would you describe your style of play in your position to those who have never seen you play before?

Quinlan – A Dual-Threat guy with great pocket presence. I believe I have a high motor and play with a lot of poise.

Six Star Football – How would you describe your style of play in your position to those who have never seen you play before?

Quinlan – A Dual-Threat guy with great pocket presence. I believe I have a high motor and play with a lot of poise.

Quinlan – My Parents without a doubt!

Six Star Football – Tell us about your summer, camps, combines, visits, etc. Tell us about the experience and what you were able to take away from it

Quinlan – This past off season I played a lot of 7on7 and trained my tail off! I was also all over for summer camps. It was a really great experience to step foot on so many different campuses. Being able to work and compete with so many different guys across the country. It also allow me to build relationships with some of the coaches out there.

Six Star Football – What are some of the things that you feel you improved upon during this off season?

Quinlan – I’m not the best by far. So there is so much growing room for me. I believe my arm strength, accuracy, footwork, etc. I’m stronger and faster also! If it’s GOD’s will that will change! I just have to continue to work until that moment.

Quinlan – Every Game that the Lord allows me to play!

Quinlan – Squatting over 350lbs was major. But I love the weight room. There’s nothing like it and the way it makes you feel.

Quinlan – My whole squad gets it in!

Six Star Football – Player to Keep an Eye on

Quinlan – That’s hard to say cause my squad has some dudes. I’d hate to name names and leave someone out