Edison standout Green is excelling on both sides of the ball. 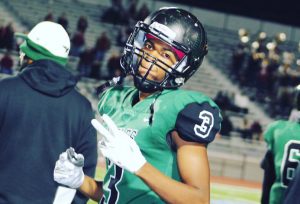 @RhazjonGreen
The future is a very bright one for a young and upcoming standout athlete named Rhazjon Green at Tulsa Edison. The junior two-way player (QB/CB) has all the tools to be a standout player at the next level.

A very skilled athlete that can play almost any skill position, Green has recovered from a concussion injury and despite having a few pics, has played well and is a key part of Edison’s success.

Rhazjon —I would have to say my older brother he pushed me every single day as a kid.

Rhazjon —I really haven’t attended any camps but this summer is a must.

Rhazjon —What most people don’t know about me is that I did boxing as a kid five years old all the way till I was ten, I actually have a uncle that’s a professional boxer Allan Green.

Rhazjon —My favorite song I would have to say is bob Marley buffalo soldier.

Rhazjon —A player to keep an eye on is Trey Richards he’s a dog.