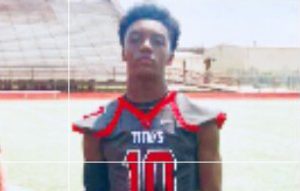 @Ricowindham01
His teammates speak highly of him and hold him in the highest of respect as a player and team leader. The Defensive back the power house Carl Albert High School describes himself as an ATHLETE in ALL CAPS!!!! He is on the money, Rico is a tremendous athlete that can make big plays all over the field and is always around the ball, terrorizing opposing receivers.

“I am a player that will do what is needed for a team, “said Windham. The junior who enjoys Architecture is just now starting to build his own football career with one more season at Carl Albert and a bright college career lined up after that. UCO and Texas State has shown interest and you can bet hand fulls of other programs will be lining up soon.

Rico —My season so far this year has been very fun just getting out there with a great group beside me knowing that we are going to take care business when we are on the field, and I feel like I stepped up like I was expected to very well this season so far.

Rico —Some things that I felt like I improved on this off-season is becoming a leader on and off the field and help push my team in anyway needed.

Rico —The most influential person in my football life other than God is my big brother Markell (BUDDY) Walker, I’ve looked up to him most of my life as a football player and learned a lot from his good and bad.

Six Star — What did you take away from the offseason

Rico —This summer it was more about building with my team and I felt like I’ve done a great job with that this summer.

Six Star — What schools have shown the most interest in you

Rico —Colleges that have interest in me are Texas State, and UCO so far.

Rico —I am really into architecture.

Rico —thank God as many times as I can before kickoff.

Rico —No Witnesses by Youngeen Ace.

Rico —The best game I had in my career is week 8 of this season vs Woodward because I had 1 INT and My first career touchdown, 10 Tackles and a WIN.

Rico —Team mate likely to be a college star is Dadrian “RABBIT “ Taylor.