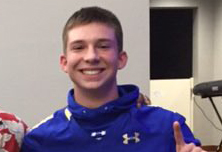 @Riley_Walker11
Lets just say Rejoice Christian had one of the most potent offenses in the state this season and the man at the helm and under the center was an amazing player…Meet Riley WalkerRiley
Walker
QB | 5'11 | 180
Rejoice Christian | 2020, class of 2020.

Riley prides himself on being a gunslinger and taking chances while not throwing picks. This year he was very good at that and was a top QB in the state with some huge numbers. Should be looked at as one of the top QB prospects in the state.

Riley—both my mom and dad. They have both taught me so much and I can’t say one over the other.

Riley—Over the summer I attended two camps. I attended Butler Community College and East Central. These camps taught me a lot because I got to see other kinds of competition and the kind of athletes that will be at the next level. It helped me prove to myself that I really can play with the big dogs even if I go to a smaller school. I performed pretty well. I believe the thing that I improved on the most was my decision making and being able to read defenses.

Riley—My personal goal for the season was less than 5 interceptions and through the regular season I had 3. Of those 3 all 3 hit my receiver and either went through their hands or bounced off into the air. I haven’t thrown a pick to the other team directly. I have been able to decipher defenses better and audible to a better playcall.

Six Star —What schools have shown the most interest

Riley—include I always have to watch Baker Mayfield highlights before the game. Everytime I watch I get chills because I am such a huge fan and while I watch I imagine myself there and doing the things he does later that night during the game.

Riley—Regulate by Warren G but currently I love the song called Martian by Takeoff.

Riley—Strength and conditioning because I get to mess with Nate AndersonNate
Anderson
RB/LB | 5'9 | 195
Rejoice Christian | 2020 about being small. (He’s way bigger than me).

Riley—Sophomore year when I separated my shoulder. I did it in the 3rd quarter on a 50 yard run and stayed in the game and we were down by 6 with 13 seconds left and threw a game winning 67 yard touchdown pass with a separated shoulder.

Riley—was when I bench pressed 200.

Six Star — Teammate that could be a star

Riley—would be Andrew Crow because of his big play ability.