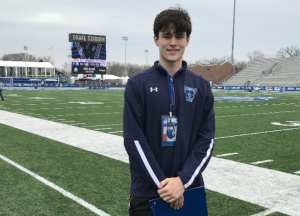 At 6’5, 185-pounds, Hunter threw for more than 2,600 yards and 24 touchdowns last season. He is a natural pocket passer who does a terrific job of keeping his eyes down field, even when rolling out of the pocket and has a strong enough arm to make throws all over the field.

“I think I played pretty well,” Hunter says of his junior season. “Considering it was my first time playing varsity football, I thought I adapted well. I feel like this year, I will be able to be a better and more influential leader on the field.”

This offseason, Hunter says he is focused on improving his speed as well as his throwing mechanics. He has worked with Justin Hoover of Spin it QB in Kansas City to change his throwing motion.

He says the most influential people in his football career have been head coach Chad Masters as well as assistants Vince Morris and Jeremy Osborne.

“They all have really helped me grow as a player and as a man,” Hunter said.

“I learned a lot of accuracy and some footwork drills to work on,” he says.

Although he does not yet hold any offers, Hunter has drawn significant interest from several programs, including Drake University, Emporia State and Missouri S&T.