Quarterback is an underrated prospect in Kansas City area. 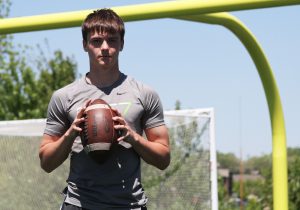 At 5’10, 165-pounds, Kearney 2018 quarterback Ryan Potts is making a name for himself as a rising QB in the Kansas City area.

A year ago, Potts was a part of a Liberty Blue Jay team that went 7-4 and advanced into the Missouri Class 5 playoffs where Liberty was eventually eliminated by Staley.

He has since transferred to Kearney, a team with its own storied history on the football field.

“I lead the team as a quarterback on the field and as far as the way I play I can extend the play with my feet and make sure the ball gets into the right guys’ hands,” Potts said. “I am a good decision maker and I try to make few mistakes.

“I bring a leadership mentality and someone who has always going to put in work and push myself and those around me. I bring a dedicated and well educated young man to a team.”

This offseason, Potts says he is working on getting rid of the ball quicker and, “In general just improving everything I possibly can to be the best I can be in every situation.”

Potts started playing football at the age of five and played all of my youth ball for the Missouri Wolverines.

“It was a great experience for me just to grow up and be apart of such an amazing organization,” Potts said. “They really helped me prepare for high school and helped me mature as a man.”

Potts says his father has been the most influential person on his football career.

“He pushes me to be the best I can be and assures me that as long as I set my mind and body to it then no one can stop me from doing what I want,” Potts said.

Potts says he tries to mold his game after Seahawks’ quarterback Russell Wilson.

“He is a very great leader and even though he might not look like an NFL quarterback he performs like one and that is all that matters,” Potts said. “He knows where to get the ball and he knows when to take shots. He can also extend plays with his feet and adds a whole other dimension to the offense that typical pro-style quarterback can’t do for you.”

Potts currently does not hold any offers, but has drawn interest from a host of colleges, including Southern Arkansas, Delta State, Butler Junior College, and many others.

“I am hoping however that my senior will really open up some eyes for many colleges,” he said.