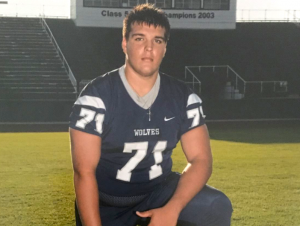 @garc4_jose
One of the state’s better junior offensive linemen, Shawnee’s Sergio GarciaSergio
Garcia
OL | 6'6 | 305
Shawnee | 2020 is putting together a breakout season and is drawing the attention of a host of college programs.

At 6’5, 300-pounds, Garcia takes pride is his technician-type approach and rarely mistakes that cost his team. Despite starting the season 2-5, Garcia says a young Shawnee team is learning on the fly this season and hopes the experience will pay off down the road.

“Our season isn’t going to well but we always stay fighting and we are very young,” Garcia says.

Garcia says his parents have had the biggest influence on his football career to date.

“Even when it gets tough they still support me through it all,” he says.

“OU and OSU — Both experiences were amazing,” Garcia said. “You have to love the tradition of these schools.”

Six Star — Most people don’t know this about me

Sergio — …but I am very quiet

Sergio — Is to hold my necklace in my hands and pray.