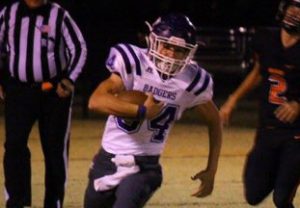 @Seth_McCaa
Located in South Central Oklahoma, Elmore City is the place where senior Seth McCaa brings a ground and pound type running style, a smash mouth in your face player who is straight ahead for the Elmore City-Pernell Badgers.

Despite a knee injury, McCaa has not let anything slow him down, the rugged and durable RB has garnered the interest of several D2-D3 schools throughout the Midwest.

Six Star — How was your season overall

Seth —Our season in 2018 was disappointing to say the least but we had a lot of players that worked hard to get us where we were just didn’t have the best outcome. I only played two games this year both with limited minutes because of injuries, but I feel I did well with what small amount of time I was able to play.

Seth —I’ve gotten three offers from Division Three schools and I’ve gotten interest in division 2 schools in Oklahoma, Kansas, Arkansas, Missouri, and Texas. No offers from Division 2 schools yet though. Grinnell College, Rochester University, and Rose Hulman are among those who have Seth on their radar. A lot of Division 3 schools have shown interest and I’m no means picky but the majority of those schools have been out of state I would like to attend college and play ball if at all possible within Oklahoma so I can take of my mom. The schools in Oklahoma that have shown interest are SNU , NWOSU, and East Central University.

Seth —The most influential person in my life concerning football would have to be our Offensive Line Coach. He’s a great guy that genuinely cares for each player. He sacrifices a lot for the greater good of our team.

Seth —I attended multiple camps this summer including Southern Nazarene and Northwestern Oklahoma State University. I would’ve attended more but I suffer a knee injury at the Northwestern Camp. I wasn’t able to showcase my skills as well as I would’ve liked and it has hurt my recruiting.

Seth —I have a great relationship with our lineman both offensively and defensively. Linemen are the heart and soul of team and I try my best to make sure they feel appreciated although most times they don’t the recognition they deserve.

Seth —Sit in our locker room all lights off and listen to Lose Yourself my Eminem. It has been our ritual since 8th grade football. My favorite song is I’m good by Trip Lee

Seth —Would be Science

Seth —Would be against Apache. We ended up losing but I rushing for over 200 yards with and interception and forced fumble and fumble recovery on defense.

Seth —My biggest weight room accomplishment was squaring 500. That was a goal of mine and something I look forward to getting back to after having knee surgery.

Seth — Hardest working player on our team is Kyle LewisKyle
Lewis
QB | 6'1 | 185
Elmore City-Pernell | 2019. Not an ounce of quit in him and is completely dedicated. One of the toughest guys I know too.

Seth —Dylan Tigert. He’ll be a senior next year but he has the makings to be a great wideout if used appropriately.