Wisby, a star is on the horizon at Putnam City, look out for this talented wideout. 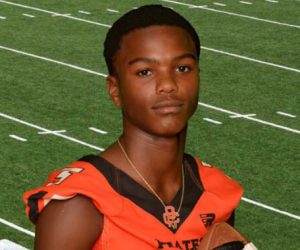 @SethWisby
One of the most physical, and tough WR’s you will find at slot position, despite not being the biggest Putnam City’s Seth Wisby won’t stop going 100% every day.

Wisby uses some nice break away speed and proves very tough to catch up and bring down once you do. Don’t Sleep….This guy will make a huge name for himself over the next couple of seasons. Has all the skills to be the next star receiver in the OKC area!!

Seth—Listen to music, and close my eyes

Seth—Sand Springs my first varsity touchdown as a sophomore

Seth—History because I like learning about the old stuff


Six Star — Teammate likely to be a star at next level