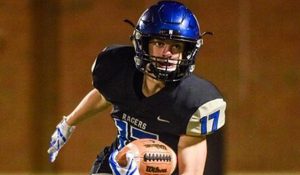 @SollyGranger
When you look at some of the Oklahoma City areas best players you have to mention Newcastle’s Solly Granger among those. A very shifty and elusive player, Granger also is a very smart player. He has been an impact player for his team and is no doubt one of their go to offensive weapons and a player that looks to have a bright future. Really a fine athlete who runs a 4.6 in the 40 and has a 33 inch vertical. Very fine product without question.

Solly – Solly, who is not attending another combine until march feels like he improved on keeping his legs running after contact and strength training was really improved

Six Star Football – Teammates to watch for are