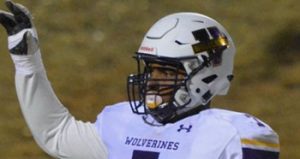 @solomon_wright
Meet one of the elite prospects of the 2021 class, and a player that could be the biggest difference maker in the 21’ class on the defensive side of the football. Vian’s big time DL prospect Solomon Wright

Solomon
Wright
DL | 6'0 | 238
Vian | 2021 racked up 91 tackles, 11 sacks, had 31 tackles for a loss all coming during his Sophomore year as a NG for the Wolverines, who also have some major talent from brother and D-1 prospect Elijah WrightElijah
Wright
LB | 5'11 | 205
Vian | 2020. Look for some huge things ahead for this athletic and tenacious DL, one of the more aggressive and fastest players on the line, Wright is a true talent.

Solomon- my Dad is because he’s been to the highest level and he shows me how to work to get there.

Six star football – How was this summer and preseason

Solomon – I worked on getting faster and stronger also more flexible, I’ve been on unofficials to osu and that’s about it. And the only camps I’ve been to are OU and ran 4.6 40

Solomon – walk the field and listen to music