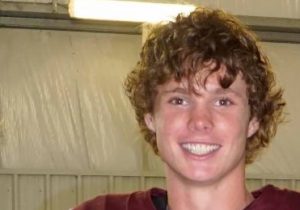 @tkgilliam
Meet one of the most athletic defensive play makers in Oklahoma….Ada’s senior DB/WR Tanner Gilliam is one of those ultimate selfless players that will do whatever it takes to help his team win. He is that player that will throw his body around to do the job and give Ada the best chance to win. He is a unique and special breed of a football player.

Tanner – The most influential person in my life is my head coach Chris Berus. He lives with a passion to be become better everyday.

Tanner – I’ve had interest in the Air Force Academy, Oklahoma University, and Southeastern University for there aviation programs. East Central University and OU are showing me the most interest.

Tanner – My pre-game ritual is to go around and pump up each teammate.

Tanner – My favorite song is Nothing Else Matters by Metallica.

Tanner – My best game is my first game as quarterback vs. McAlester were I rushed for 168 yards.

Tanner -My biggest weight room accomplishment is my 240 hang cling.