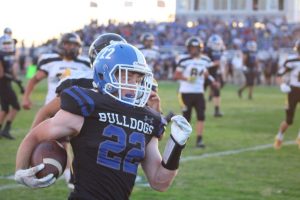 @mcbee_tanner
One of the most patient and effective runners in Western Oklahoma is for sure Hooker High’s Tanner McBee. He lets his blocks develop and makes a cut off of them. McBee is a player who tries to make you miss, but is capable of lowering his head and get a few yards if he needs to.

The most influential person

Tanner- for me was Coach Trevor Powers, he had full faith in me to get the job done. He pushed me every single day to be a better player.

Tanner – I went to Texas Tech strength and condition camp, which helped me become a stronger better football player and how to do the correct movements to make me faster. I improved most on by letting my blocks develop to let me make the right cut.