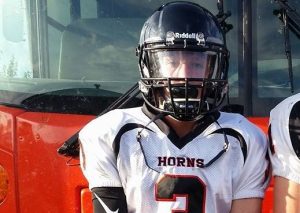 @TattonAnderson
Meet one of the hardest working players in Oklahoma football, just a Sophomore Alex RB and CB Tatton Anderson

Anderson is a very fast player who never takes a play off. He is for sure a player that knows how to get the job done and can prove it with his numbers and style of play.

Six Star — What did you improve on during the offseason

Tatton—I got a lot stronger and faster.

Tatton—I go to two football camps every year one in Dewar thats a team camp and another at my school the Josh Heupel camp. I learned a lot at the camps every year how to get a great sprinter stance how to explode off the line great forms and other stuff

Six Star — What colleges would you like to play at

Tatton—I really wanna go to UCO and play football and I have visited them but nothing other than that.

Tatton—Probably against Davenport I had 17 carries for 201 yards and 4 touchdowns and I also had 14 receptions for 251 yards and another 4 touchdowns.

Tatton—Probably my best friend Jonathan Fitzsimmons. He is a big boy and really athletic