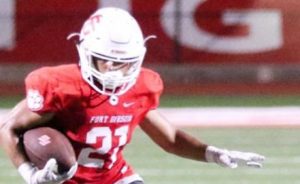 @tavien34
Looking for a hard running back that gives it his all, Fort Gibson, Oklahoma, sitting 50 miles SE of Tulsa, is home for Tavien Woodworth. Woodworth is one of the most shifty runners you will find and is a player who keeps his feet churning and never stops his legs from driving.

Tavien —2018 season- It was very fun, and I played at a high level for my first year in varsity but still have alot of work to do.

Tavien —My Grandma and Grandpa has been the most influential in my football life.

Tavien —I attended a USA camp, what I took away from it was that there are alot of athletes that are trying to achieve the same goals I am and that motivated me to work harder.

Tavien —I have read the whole Bible

Tavien —Don’t have one

Six Star — Teammate most likely to be a college star