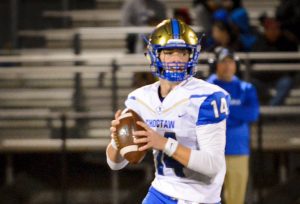 @_thadwilliams
Every team and coach looks to build their program around a player that is a naturally born winner and competitor. A player who has the will to be the best and the ability to accomplish that. Choctaw’s junior QB sensation Thad WilliamsThad
Williams
QB | 6'3 | 195
Choctaw | 2020 is just that guy.

The 6’2, 195 QB runs a 4.8 40 yard dash and plays in an RPO offense. One of the most accurate passers you will find, Thad does a great job of understanding defenses. Not only does he get the job done on the field but he also is a great student who is part of the National Honor Society with a 4.0 GPA and a 27 on his ACT. Sound good enough, it does not stop there, add in another sport that he excels in, he also plays baseball in the offseason and oh did we mention he also was a wrestler for 11 years where he was a two time state champion, one time national champion and a 5 time all American before deciding his Sophomore year, to go to two sports. In 2018 Williams aired it out for 1,453 yards, 10 touchdowns and had only 4 interceptions with a 53% completion percentage. Thad is a versatile QB who can make any throw on the field in the pocket with an ability to extend plays when needed.

Thad—My 2018 season did not go as well as I wanted but was a learning experience for me.

Thad—This offseason I have improved in the weight room and on my mental aspect of the game.

Thad—In my football career so far has been my dad. He has pushed me to become who I am as a player and has believed in me through everything

Six Star — What camps did you attend over the summer

Thad—Over the summer I have been to multiple colleges, such as Oklahoma state, OBU, southeastern, Oklahoma university, and a super camp at the university of A&M commerce. I also attended the dime dropper camp to improve as a quarterback.

Thad—I have an interest in being able to play football in college with the benefit of having my college paid for. Not many colleges have showed interest in me.

Thad—also play baseball in the offseason.

Thad—My pregame ritual includes listening to chill music to stay calm and give me time to think about the game.

Thad—Math is my favorite subject in school because it comes very easy to me.

Thad—My biggest football game was against deer creek high school this season. This is because I put up pretty good numbers and was able to show my ability to roll out and throw on the run.

Thad—is being able to rep our 225 five times.

Thad—Zane Coleman is a teammate of mine who is attending Arizona state to wrestle and I believe he will be very successful in his collegiate career.

Thad—All of my team works hard, but if I had to pick one who stands out I would have to say Cade Sanford.