Smart, big, and talented lineman for Checotah has all the skills to make it big: Todd Lackey 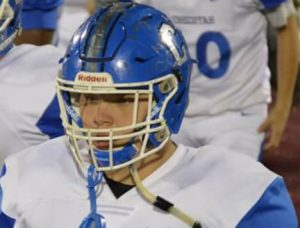 @toddlackey2000
One of the most aggressive, quick off the line offensive lineman you will find is Todd Lackey of Checotah. Tons of power with great footwork, Lackey prides himself on being a cognitive player with mass to go with it. It a nutshell Todd is the whole package, he can do it all and is a player that every college coach needs to keep on their radar.

Todd—We had a great season. We were in a four way tie for second in our district going into our last game. our record this year was 6 and 3. I’ve had immense growth since last summer physically and mentally. I’m very proud of my team

Six Star — What camps did you attend this offsesaon

Todd—Definitely my Offensive coordinator, Coach Brian Young. He encouraged me to do my very best no matter the circumstances.

Six Star — Most people don’t know this but

Todd—Going over my playbook staying focused while listening to music.

Todd—Eye of the Tiger fav song

Todd—Science because I’m am a very literal person

Todd—Best game Checotah vs Eufaula 2017 McIntosh County war longest running rival in Oklahoma. Over 100 years we are the only 2 towns in our county. There is a traveling trophy kept by the winner for a year. We took the trophy home last year and kept it also this year.

Todd—Benching 300 would definitely be one of my biggest accomplishments